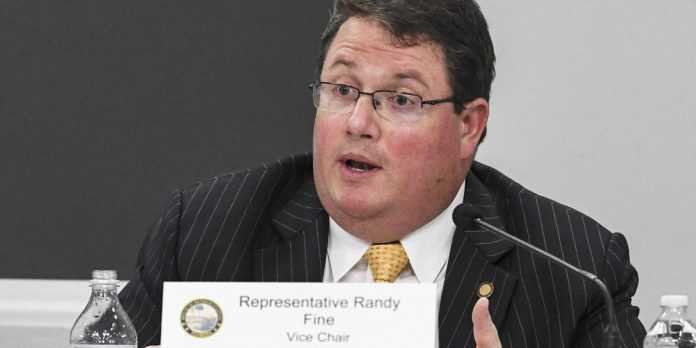 The City Council for the City of Melbourne held 2 special meetings to consider an offer from State Representative Randy Fine to “pay for” the City’s traditional 4th of July celebration that had previously been cancelled along with every other municipality due to Covid-19 concerns.

In several social media posts and interviews, Fine (Republican-Melbourne Beach) said that he would pay for the fireworks because he felt that the city needed something positive, and that if the city “allowed protesters to protests, then they should allow fireworks.”

Last Wednesday, Vice Mayor Paul Alfrey called a special meeting to consider Fine’s proposal. Randy’s wife Wendy presented the offer personally on his behalf as he was on vacation out of town. In her comments she stated, “So on behalf of Randy and our boys, I hope you will accept our offer to pay $20,000 to sponsor One Fine Night: A Celebration of America.”

The only other speaker present for the meeting was Robert Burns, owner of The Relentless Group, a political consulting firm hired by Randy Fine’s republican opponent Marcie Adkins. Burns brought up several issues with Fine’s proposal for the council to consider before making a decision. Besides the safety and liability concerns with Covid-19 which was the initial reason for the event’s cancellation, and the dramatic increase in cases recently, Burns argued that this was nothing more than a campaign event for Fine disguised under “patriotism.”

He pointed out that this event which Fine named after himself, was promoted exclusively from Fine’s campaign Facebook account, and paid emails from Fine’s campaign. He also stated that Fine was vague about paying for the event. Although he used words like “personally,” he never disclosed the source of the funds. Burns suspected that based off of Fine’s previous behavior, he would try to use money from donors to his re-election campaign, instead of his own personal money as he implied. Financial disclosure documents show that Fine claims to have a net-worth of $24 million.

City of Melbourne Mayor Kathy Meehan then asked Wendy Fine where the funds were actually coming from. She responded that she didn’t know. Council was unanimous in agreeing that if it were indeed a campaign event, that the City could not own the event. Fine would have to apply for a special events permit, and put on the event himself.

Also of concern was the actual cost. Fine offered to “cover the cost” of the event up to $20,000. However, the event was said to cost no less than $26,000 not including the mandatory overtime costs for police and fire that would have to cover the event. There was also concern that for an event that traditionally has approximately 10,000 in attendance, the number would dramatically increase as it would be the only event in the County. The police and fire chief’s both expressed concerns over handling the traffic and attendance, in addition to trying to maintain social distancing and other guidelines issued by the Governor for Phase 2 of reopening Florida.

They decided to continue the meeting to Friday, to try and get answers to some of the concerns brought up. The vendor for the fireworks also stated that they had to have an answer by Friday in order to pull it off.

The city attorney for Melbourne wrote a letter to the council after speaking with Representative Fine prior to the Friday meeting. She stated that after her conversation with him, it was her understanding that Fine was indeed planning to pay for the event out of campaign finances, and not his own money as originally believed. Her letter goes on to outline the legal and ethical concerns this presents.


When asked today in an interview with Fox35 of how Randy intended to pay for the event, he stated he planned on writing a check to his campaign, and then paying for it through campaign. Essentially his check would count as a loan from himself to the campaign to which he could immediately pay himself back from campaign funds. If he were to write the check from his personal account to the city, then he would actually be paying for it as he implied and could not be reimbursed for it by his donors.

He went on to say that he didn’t necessarily want the city to say “you must vote for Randy,” but he did want the event named after him.

The City Council unanimously declined the offer and not even a motion was made for a vote.

As a result, Fine took to social media to lash out and attack the council as individuals calling them unpatriotic and having double standards allowing protestors to protest but not allowing his celebration.

Two of the current councilman are United States Military veterans. Vice Mayor Paul Alfrey from the Coast Guard, and Councliman Tim Thomas, a retired Lieutenant Colonel form the Army who also teaches JROTC. Thomas took great offense to the unjust attack from Fine and expressed so on his own Facebook account.

Thomas wrote: “This type of reckless post from an elected official, who has never served this great nation, but is afforded the free speech many have given the ultimate sacrifice for, is absolutely uncalled for and I will respond to it.”

Vice Mayor Alfrey, who is currently running for Mayor agreed with Thomas. As a once long time advocate for Fine, in an interview with Florida Today, Alfrey said Fine’s implication has strained his working relationship with Fine.

Why is this happening?

Alfrey and Thomas are just the latest of a growing group of elected and prominent Republicans who have been not only distancing themselves from Fine, but uncharacteristically publicly ridiculing his behavior and attacks on other local officials and residents. Fine proudly wears the title of bulldog in the legislature, but the tolerance of his bullying has seem to run out.

For the first time ever, Fine faces a Republican Primary challenger in Dr. Marcie Adkins, an Economist who was motivated to run against Fine based off of similar behavior in his last legislative session where he failed to pass almost any bills or secure any funding for his district, but managed to make numerous negative headlines.

Adkins (Republican-Grant-Valkaria), a UF grad with a PhD. in economics is a political newcomer. She says that her last straw with Fine was when she personally witnessed him lie and mislead a committee hearing about a bill he ambushed everyone with. When she tried to speak to Fine about it, he and his office ignored her. She decided that instead of just complaining about a problem, she would be a solution. Adkins says that “Politicians are elected to serve, not be served.”

She believes now, more than ever that our State’s economy if facing unprecedented challenges. As someone who has dedicated their life to Economics, she believes she has the skillset required to right the ship. When elected, she would be the only representative in the State with those qualifications.

Fine is now scrambling to put together a campaign team to face his unexpected opponent. Adkins has drawn tremendous support amongst both local and other conservatives throughout the state as Fine comes under fire after recently published financial reports show he has several questionable if not illegal expenditures of tax payer dollars.

Most recent is a report that shows Fine had taxpayers spend $1,760 to install a personal Tesla car charger at his office. Fine drives an electric Tesla Model S with an approximate range of 300 miles. His State office is less than 8 miles from his home in Melbourne Beach. In addition to that, he also claims mileage reimbursements for him and his 2 staff members individually for traveling within the city of Palm Bay for events like speaking to children at schools.

Fine is on record as criticizing many local elected officials for how they spend tax dollars, even stating it is criminal for an elected official to have a government issued cell phone because they have their own. He says this is why he uses his personal phone for official business to save tax payers money. Yet the reason elected officials are issued cell phones is for legal reasons to ensure compliance with public record laws. Additionally, Fine goes on many tax payer funded conferences all over the country when not in session, at times taking his family and parents with him.

It appears as if his words contradict his actions in practice as more revelations are brought to light.

As a result of this behavior and past, criticism and separation from him is growing quickly in what some have described as a sinking ship. Internal polling numbers paid for by Fine himself show a dramatic lead by Adkins for the upcoming election August 18th. The winner would face democratic challenger Phil Moore in the general election this November.

Given all this, Fine has doubled if not tripled down on the fireworks debacle and is promoting a “fireworks protest” to further defy the council’s decision. However judging from the comments that have yet to be deleted from his post, even many of his supporters are evidently tired of it.

More fireworks are expected tomorrow as officials who were not available to respond today, will Wednesday in response to Fine’s further inflammatory and divisive comments.