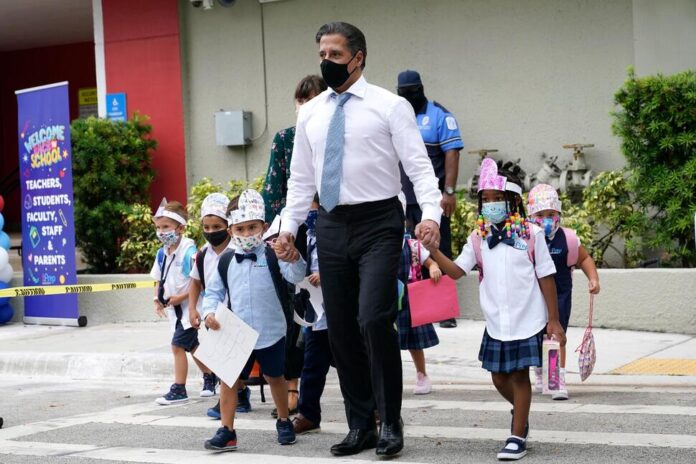 A federal judge has declined to block a ban imposed by Republican Gov. Ron DeSantis to prevent mandating masks for Florida school students amid the ongoing coronavirus outbreak.

Judge K. Michael Moore in Miami denied a request by parents of disabled children for a preliminary injunction against an executive order that DeSantis issued in July that served as the basis for the Florida Department of Health issuing a rule that required school districts to allow parents to opt out of any student mask mandates.

Moore wrote in Wednesday’s ruling that parents should have pursued administrative claims before filing a lawsuit.

Plaintiffs’ attorney Matthew Dietz said in an email that he believed the judge misconstrued a U.S. Supreme Court decision about the exhaustion of administrative remedies in cases involving children with disabilities. He pointed out that it takes at least 75 days for administrative preconditions to be exhausted in Florida, meaning children with disabilities who would be seriously injured or killed by a COVID-19 infection would be unable to return safely to their school.

In a separate case filed in state court, the 1st District Court of Appeal ruled last week that a Tallahassee judge should not have lifted an automatic stay two days ago that halted enforcement of the mask mandate ban. That lawsuit contends that DeSantis does not have authority to order local school boards to ban mask mandates. Leon County Circuit Judge John C. Cooper agreed last month, but the state continues to appeal that decision.

The rulings mean the state can resume its efforts to impose financial penalties on the 13 school boards currently defying the mask mandate ban. Those have included docking salaries of local school board members who voted to impose student mask mandates.

The U.S. Department of Education has announced a new grant program to provide funding for school districts in Florida and elsewhere that lose money for implementing anti-coronavirus practices such as mandatory masks. The federal agency has informed state officials that it would also be investigating whether the state’s ban on mask mandates violates federal civil rights laws that protect students with disabilities.

DeSantis has argued that the new Parents Bill of Rights law reserves solely for parents the authority to determine whether their children should wear a mask to school. School districts with mandatory mask rules allow an opt-out only for medical reasons, not parental discretion.