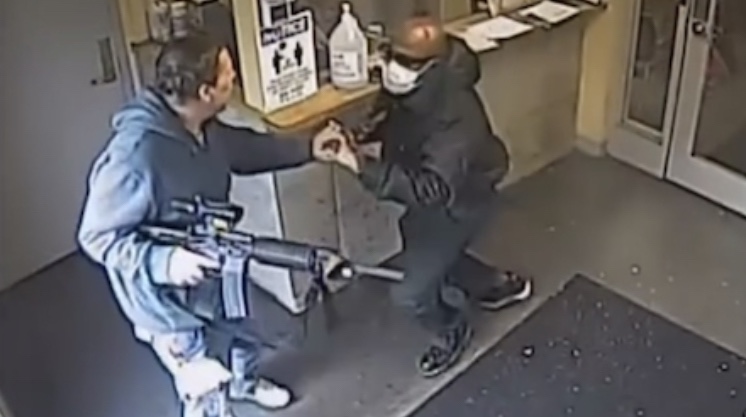 Buffalo police released video segments from two security cameras taken inside and outside the Alba de Vida substance abuse treatment clinic on Virginia Street from Thursday morning when a man armed with an AR-15 burst into the waiting room.

The videos show how two security guards – who police say were unarmed – and two bystanders helped take down the suspect, Jeremy Griffin, 48, of Williamsville.

The two guards, now hailed as heroes, quickly subdued the gunman who entered the clinic at Virginia and 10th streets, pushing him outside and onto the ground before police arrived to take him into custody. No one was injured in the incident, though several shots were fired. The two guards were just recently hired.

” … I thought this was compelling enough to release, particularly to show the bravery of the security guards and the bystanders,” Buffalo Police Commissioner Joseph Gramaglia said.

Taken from a corner looking down into the small room, one guard, wearing black and white Covid-19 face mask, stands in the middle by the partitioned reception desk and appears to tuck a pair of gloves into his pocket. He is looking toward the front door when a man in a dark hoodie sweatshirt holding an AR-15 style rifle suddenly comes inside.

The gunman fires a shot into the wall and the guard appears startled. He turns around toward a glass door. Other workers inside also react, appearing to try to figure out which way to go.

The second video, a 54-second clip, was taken from outside.

A person can be seen walking on the sidewalk in front of the clinic. That person immediately rushes toward the open door to help.

Another person walks toward the commotion and then quickly scuttles away as a pile of men spills out onto the sidewalk.

Buffalo patrol officers arrived moments later and took Griffin into custody. He was taken to Erie County Medical Center for an evaluation, and then was arraigned Friday on multiple felonies. He was charged in a shooting that took place minutes before the encounter in the clinic. In the earlier shooting, he is accused of shooting a woman in the upper leg at a residence on Pennsylvania Street. He was charged in both incidents and was remanded to jail.