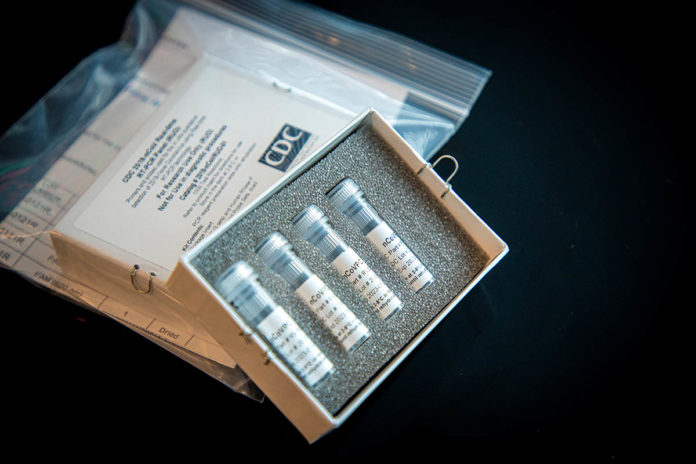 In an internal email obtained by The Space Coast Rocket, Health First officials say that “Despite reports in the media, our ability to test for Covid-19 remains limited. Few commercial labs have started to test, but are only supplying us with a limited number of acquisition kits.”

Local elected officials have been posting inaccurate, incomplete, and confusing information on their official Facebook pages in regards to the virus. State Representative Randy Fine (R-Palm Bay) has several posts stating that anyone who meets 1 of the 5 criteria outlined by the CDC can get tested. That is simply untrue. As outlined by Health First themselves, testing capabilities are extremely limited. Fine goes on to say that anyone can be tested by their own physician if they can convince their doctor to test them. That is also untrue because most clinics, including his own according to him do not have the tests. Several residents commented on his posts stating the inaccuracies from their own experiences.

State Representative Randy Fine I know this not to be true. I called my doctor on Friday and was told that with my symptoms, they would have to turn me away if I came into the office and would give me a direct referral to the Florida Dept of Health, who would then decide if I should be tested. So, I was referred to Florida Dept of Health who concluded that I should be tested. They took all of my information and said they had to put me in contact with the Brevard County epidemiologist to confirm that I would need testing. I received a call within a half-hour or so from the Brevard County epidemiologist who said that my symptoms did match more closely to COVID-19 than the flu and that she could send me to a testing location. BUT, that I would “likely have to wait several hours in very close proximity to many people, some of which would likely have either COVID-19 or the flu”. So, if I didn’t have COVID or the flu already, then I would be putting myself at risk. It was my choice. Several hours with people who were already sick too, maybe sicker than me? I said no, thanks.

Several healthcare providers from other clinics also responded stating that they were not capable of testing for the virus for anyone despite meeting any criteria.

The next day Fine reiterated the inaccurate information in another post.

In the 4th numbered comment of his post Fine states his own doctor does not have the testing kits, but then goes on to say in the 6th numbered point that if you meet the criteria you can get tested by your own primary physician PERIOD. By his own admission, he could have shown up to his primary physician and not got tested because of the fact that he does not have the testing kits. The information is completely false.

Brevard County Commissioner Chair Bryan Lober who is also the Chair of the Brevard County Policy Group, stated in an interview that there is a very limited number of tests and that those wanting to be tested must meet the aforementioned outlined criteria. One of the criteria he outlined was being exposed to someone who has the virus. Obviously, because of the limited amount of available tests and the fact that the majority of people under the age of 65 could have the virus and show no symptoms it is impossible to know whether or not you have come into contact with someone with the virus. That is the total reason for what is been called “social distancing” because you simply do not know if the person next to you is infected or not. Neither do they.

In the another interview, Commissioner Lober goes on to encourage people to “live their lives” encouraging them to go to restaurants if they wanted and as he will continue to do. He says this while also stating to limit your presence at public gatherings of over 50 or even in some cases 10 people. You can see why the public is confused by this messaging. He also goes on to say that the closing of any county facilities or parks are not even on the table as of yet.

To further reassure people, he stated the fact that the Administrator for Brevard County’s Public Health Department decided to go on a cruise during this event herself. He pointed out that she is the highest ranking health official in our area and in the top 5 in the state with the most information available to her than others, and is still “living her life.” This drew sharp criticism from the public as being on a cruise ships is listed as part of the criteria for testing, and by going on a cruise you are essentially voluntarily violating all the recommendations outlined by the CDC. There was also no guarantee that she would even be able to return to her duty as many cruise ships have been diverted and even prohibited from docking at ports. State Representative Randy Fine called her actions “nuts.”

I would say that the government and local officials continue to put the community at risk, because they’re using an “if we close our eyes real tight and pretend it’s not happening” approach it will go away. If you look around, all the stores are packed full of people. They have a fake idea this isn’t happening because we haven’t had any positive results, yet we haven’t tested people unless they meet the specific criteria provided by the CDC. Must have traveled to one of the “hot spots” Italy, Iran, China. Must have a high fever, dry cough, and be over 65. At what point does it matter anymore where someone has traveled, when the airborne virus is already here. We have an at risk community here in Brevard county with a vast over 65 community.

Commissioner Lober announced in a Facebook Live interview on Space Coast Daily last night that Brevard County had it’s first positive test for the virus. He has drawn criticism again for not releasing the information through official channels or even through the County’s website and social media pages until after he conducted the interview with a private for profit organization which he often promotes. We are trying to find out just how long he delayed this information to the public once he was made aware of it through a public records request.

During the writing of this article, Governor Desantis just ordered all bars and night clubs closed effective 5pm today. He also recommended that all restaurants reduce capacity to 50% and distancing tables to make sure there is six feet of separation between groups of diners.

This is the floor for the FORESEEABLE future.