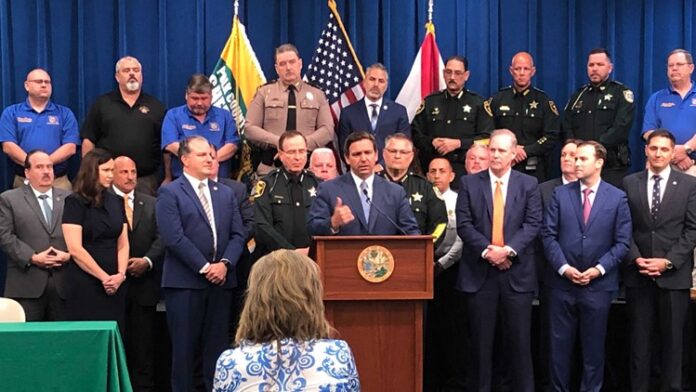 Gov. Ron DeSantis signed an anti-riot bill into law on Monday morning that’s aimed at protecting law-enforcement agencies and cracking down on protests that turn violent.

“I think it’s really remarkable if you look at the breadth of this particular piece of legislation,” DeSantis said during a news conference before signing the bill. “It is the strongest anti-rioting, pro-law-enforcement piece of legislation in the country. There’s just nothing even close.”

Florida’s Senate passed the bill last week 23-17, with only one Republican voting in opposition alongside Democrats.

The law, which was designated HB 1, includes a number of measures that crack down on protests in Florida.

It defines a “riot” as a public disturbance involving three or more people “acting with the common intent to assist each other in violent and disorderly conduct” that results in injury to another person, damage to property, or danger of injury or damage.

The law grants civil immunity to people who drive into protesters who are blocking a road, prevents people accused of rioting from bailing out of jail until after their first court appearance, and increases penalties for assaulting law-enforcement officers while engaging in a “riot.”

It also penalizes local governments that interfere with efforts to stop a riot and allows law-enforcement agencies that face funding reductions to file objections.

In a statement to NBC News last week, DeSantis said the legislation “strikes the appropriate balance of safeguarding every Floridian’s constitutional right to peacefully assemble, while ensuring that those who hide behind peaceful protest to cause violence in our communities will be punished.”

But critics say the legislation, and similar bills in several other states, are part of crackdown efforts after a summer of social-justice protests nationwide, according to Pensacola News Journal.