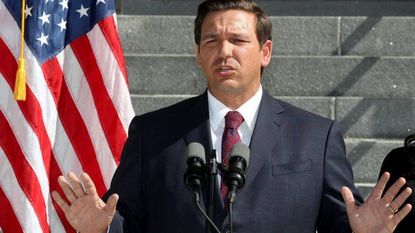 (SB 832), which was approved Tuesday in a 4-3 vote by the Senate Ethics and Elections Committee and must go before two more committees. The proposal would create a public-records exemption for the home addresses, telephone numbers and dates of birth of members of the House, Senate and Cabinet, as well as the names, employers and birthdates of lawmakers’ spouses and children.

“You elect someone, you kind of need to know where they live if they’re going to represent your community,” DeSantis said.

The House version of the bill (HB 1191) has not been heard in committees.

Senate bill sponsor Kelli Stargel, a Lakeland Republican elected in 2008, said her intention in trying to shield the personal information is to avoid incidents of violence.

“The animosity, at least the emails and things that I have seen have risen to a higher level than they were even when I first got elected,” said Stargel.

Stargel said the internet has made it easier for people to get public records.

“As Governor, I know we get certain things that one has to respond to,” DeSantis continued. “But just to do a blanket without there being any type of reason to do it. I just have to look at it.”

The Florida AFL-CIO, in opposition, framed the bill as one of a myriad of erosions of the Sunshine Law, saying “this is a very big exemption.” Many waived in opposition. No member of the public backed it.

Sen. Jose Javier Rodriguez opposed the bill saying the case “has not been made,” despite “threats” to members of the Legislature.

As well, Rodriguez questioned non-disclosure of addresses given the potential for legislators to run outside their districts and hide their addresses.

Several elected officials in Brevard County have come under fire from citizens for not actually living in the districts which they are elected to represent. Residency is one of the very few requirements to run for Florida Senate or the House. Some are accused of owning property in the districts, but physically living elsewhere, or once “termed-out” in one district, simply running again for a neighboring district.

“I don’t think it needs to be as easily obtainable for public consumption in light of the hostility we’ve seen, the climate,” Stargel added.

Governmental Accountability and Rules are the next two stops for this bill on the Senate side.