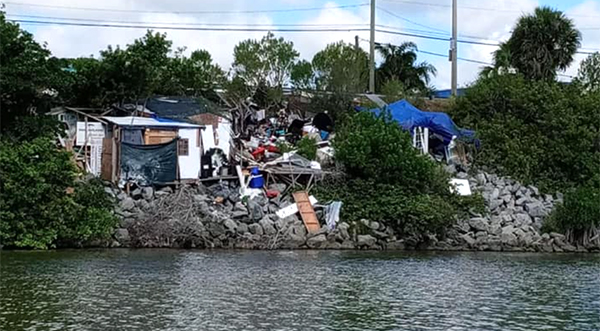 Daily Bread Inc, backed out of a proposed $25 million homeless development on Malabar Rd in Palm Bay just hours before the Palm Bay City Council meeting to approve or deny their request for a $5 million dollar grant. The proposal, a year in the making received much backlash from the citizens of Palm Bay after Melbourne Mayor Paul Alfrey made a Facebook post that implied it was all but a done deal.

Though the proposal likely had little chance to be approved anyway, Alfrey’s antics ensured it was dead on arrival.

Alfrey’s post sparked so much outrage from the citizens of Palm Bay, the City Manager was forced to address the issue at a city council meeting to ensure the public that nothing has been decided, even remotely.

Mayor Alfrey has been working hard to evict the homeless population out of Melbourne to adjacent cities. He effectively outlawed pan-handling in the city in a controversial city ordinance that walks the line of being constitutional under the guise of “public safety” to address safety concerns that are already addressed with laws already on the books. They just didn’t enforce them. In an interview last September with Florida Today, Alfrey shares stories of the “nuisance” down town patrons have expressed with the homeless population, and stated “I wont stand for it.”

Now he has been coordinating with the Daily Bread to move them out of Melbourne completely, and into Palm Bay, also selling all of their properties in the down town Melbourne area.

Daily Bread has received millions of dollars in grant funding from CARES Act/ARPA funds in order to subsidize their efforts to build ‘Grace Place’. Just not in Melbourne where Alfrey is attempting to bring in high-end luxury development in it’s many vacant lots and abandoned properties.

In reviewing the grant application submitted by the Daily Bread to Palm Bay, many questions arose.

In their proposal, a contract was included for the purchase of a vacant nearly 7 acre lot on Malabar Rd. That area of Malabar Rd is one of the highest trafficked areas in the city. The lot they purchased for nearly $1 million is not even zoned for the purposes they intended to use it for. It would also require a comprehensive plan/future land use amendment. Given the current plans for the city, these obstacles were highly unlikely to be overcome, and there was no alternative site proposed. So why this location?

The owner of the lot is identified in the contract as Merritt Island Holdings, LLC, which is owned by Dudley Garner. Mr. Garner also happens to be on the board of directors for another non-profit in Palm Bay, Promise In Brevard. He owns several large vacant lots in the city, and has owned this lot since 2013.

The grant application was facilitated by Kelly Hyvonen of Land Development Strategies, LLC. In the proposal, she is listed as the “Project Manager” being paid $3,750 monthly during predevelopment activities regardless of amount of work done. I put in a call to the Daily Bread asking how they were referred to this consultant and for how long she been being paid. We did not get a response and less than 24 hours later, Daily Bread Inc emailed the City of Palm Bay withdrawing there proposal. Based on her own description, her predevelopment services will be or have been at least $45,000.

Included in the proposal was a copy of Kelly’s resume’. In her resume’ she reveals that her most recent position was the City Planner for Alfrey’s City of Melbourne. Her resume’ states that she started working for herself with her company Land Development Strategies in March of 2020. However, that does not appear to be accurate. According to records with the State of Florida, Land Development Strategies didn’t exist until August of 2021, less than 30 days after Alfrey announced on Facebook the approval for millions of dollars in funding for ‘Grace Place’.

It would appear that Kelly was not truthful on her resume’ which she submitted as supporting documentation in the application grant for $5 million from the City of Palm Bay she facilitated. What also raised a red flag was the address of her business which is her home. It just happens to be about 7 houses down from Randy Fine’s previous address. There’s nothing wrong with that, but it is an interesting coincidence given the players involved.

Even though Daily Bread has withdrawn their request for this particular site, they still intend to show up tonight and request the $5 million in funding anyway. As of the writing of this article, they have not submitted any alternative sites to the city. They are anticipated to name some possible locations in the future, maybe, and still want the funding with no plan in place. There were also other parts of the application that were left incomplete.

Jeffrey Njus, ThD is the appointed executive director of Daily Bread Inc. He was appointed by the board in late 2017. Their IRS form 990 from 2018 states his salary was $55,000 annually for 50 hours a week. In their grant application, it states his current salary is $75,500 annually. He’s received a 40% raise in approximately 3 years and according to their most recent tax forms, has decreased his hours from 50 to 40 (20%) per week to go with the higher pay.

Additionally, to go along with the raise, the 2019 tax forms show they went from operating at a $64,998 loss to a $194,943 loss the following year. Under his leadership, their losses have nearly tripled. It should be noted however, that now after receiving millions of dollars in tax funded grants, they are operating in the black, for now.

There are MANY locations that cold facilitate the much needed idea of ‘Grace Place’ that make a lot of sense. It is undeniable that the services proposed are needed, and wanted. Daily Bread currently has the capital to buy anywhere they want. But there’s not as much money to be made in taking over an existing structure vs building a new one.

One location is a hotel on US1, Riders In the Storm that was just abandoned weeks ago. It is right around the corner from the current Daily Bread Location.

Some residents have kicked around the idea of the vacant Sears building on Babcock Street across from Melbourne High school.

There are also several vacant lots in the very vicinity of their current location that Alfrey is pushing for luxury apartments instead.

There are several other hotels that have been mentioned that are no longer in service that are essentially turn key and could be up and running within months instead of at least 2 years. Alfrey states that he has the backing of his entire council on this project, but has not proposed one single location within his city limits.

Daily Bread will be competing with 13 other organizations tonight for the funding from the city of Palm Bay. Many residents will be there to share their concerns.

There’s a lot more to dive into on this project, but we shall wait and see what is actually proposed tonight.

You can review all the proposals and their complete packets here.