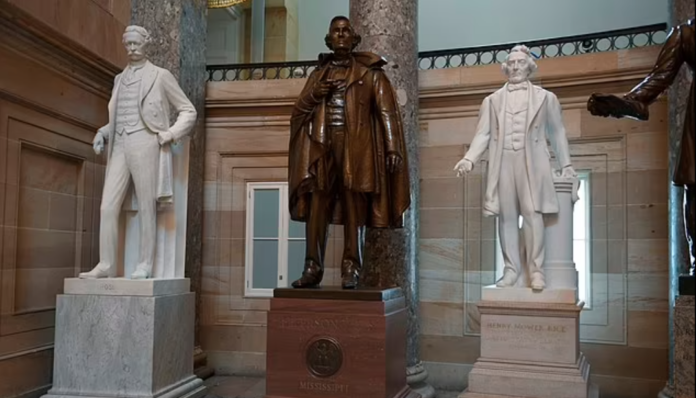 The House voted Tuesday night to remove the bust of Chief Justice Roger Taney and statues of Confederate President Jefferson Davis and others who supported the Confederacy from the U.S. Capitol.

Democrats were unanimous in their support for the bill and were joined by 67 Republicans, with the bill passed by a vote of 285-120.

The 120 GOP members who voted against the bill said it was a bid to whitewash history, accused the Democrats of being ‘animated by Critical Race Theory’ and opposed swapping the bust of Taney with Supreme Court Justice Thurgood Marshall because he voted for Roe v. Wade.

The vote came after House Minority Leader Kevin McCarthy accused Democrats on the House Floor of trying to hide their party’s ‘shameful’ racist past.

‘Let me state a simple fact. All the statues being removed by this bill are statues of Democrats,’ the Republican leader said, adding that he planned to vote in favor of the legislation. ‘I think the bill should go further. Maybe it’s time the Democrats change the name of their party.’

McCarthy said the bill showed that the Democrats were ‘desperate’ to prove that their party has progressed from their ‘days of supporting slavery, supporting Jim Crow laws or supporting the KKK.’

The Democratic House majority has been proactive since last summer’s protests over the death of George Floyd in removing symbols of the Confederacy from prominent locales.

Last June House Speaker Nancy Pelosi announced she would be removing portraits of four former House speakers who sided with the south to mark Juneteenth.

‘They were all Democrats,’ McCarthy also pointed out Tuesday.

The vote on Tuesday means that a bust of Roger Taney, the U.S. chief justice best known for an infamous pro-slavery decision, as well as statues of Jefferson Davis and others who served in the Confederacy, will be removed from the U.S. Capitol.

Taney ruled in Dred Scott v. Sandford in 1857  that slaves were not United States citizens and could not bring lawsuits into federal courts.

A similar bill last year passed the House but failed to gain traction in the Senate. Backers are hoping for a different outcome now that President Joe Biden is in the White House and Democrats control the Senate.

Rep. Hank Johnson, a Georgia Democrat, said the Confederate statues send a message to black people that their lives are not valued because those being honored ‘stood for the proposition that you were less than human.’

The Taney bust would be replaced with one of Thurgood Marshall, the first black justice to serve on the nation’s highest court.

Republican Rep. Glenn Grothman said he was against the bill because Marshall was a key vote in the Roe v. Wade decision, which legalized abortion nationally in 1973.

‘I will always look at him as … the guy who kind of put the foot on the gas and legalized late term abortion,’ Grothman said, according to CBS News .

Alabama Rep. Mo Brooks said before the vote that he’d be voting the bill down because he believed it represented ‘cancel culture and historical revisionism.’

Republican Rep. Matt Rosendale of Montana parroted points made by former President Donald Trump when he voted against the bill.

‘The South lost, and our Union is strong today, and the great victory of our constitutional government in the Civil War over slavery and secession should be celebrated,’ Rosendale said, according to Newsweek.

‘Unfortunately, Democrats, animated by the Critical Race Theory concepts of structural racism, microaggressions, and a United States based solely on white supremacy, have chosen to remove statues that underscore the failures of our pre-1861 Constitution. Make no mistake, those who won the West and George Washington are next,’ Rosendale added.

During last summer’s George Floyd protests, Trump claimed slave-owning founding fathers, like Washington and Thomas Jefferson, would be cancelled by liberals next.

House Republican Rep. Barry Loudermilk said he voted against the bill because he believed the Democrats rushed it procedurally.

‘My opposition to this bill isn’t because of the goal that we’re trying to achieve, but it’s the way that the majority continues to skirt procedure in this body,’ the Georgia GOP lawmaker said, according to NPR. ‘For the second consecutive Congress, this bill was rushed to the floor without a hearing or a markup in the Committee on House Administration.’

The 2-foot-high marble bust of Taney is outside a room in the Capitol where the Supreme Court met from 1810 to 1860.

It was in that room that Taney, the nation´s fifth chief justice, announced the Dred Scott decision, sometimes called the worst decision in the court’s history.

The Supreme Court held that Scott as a black man was not a citizen and therefore had no right to sue, and found that legislation restricting slavery in certain territories was unconstitutional.

The vote comes against the backdrop of larger reckoning in the U.S. with racism, one that’s prompted a reassessment of statues and other symbols that valorize those who upheld white supremacy.

Protesters decrying racism last year targeted Confederate monuments in multiple cities, leading to many being taken down. But many others remain in places of honor, including at the U.S. Capitol.

‘We cannot achieve true equity and a sense of welcome in public spaces if we continue to honor individuals who rose to prominence upholding slavery and other examples of systemic racism,’ nine environmental groups, including the Sierra Club and League of Conservation Voters, wrote in a letter to lawmakers urging them to vote for the bill.

Longer-term, the architect of the Capitol would be instructed to identify any other statues depicting those who served in the Confederate States of America for removal from public display.

The statues will go back to the states that sent them.

Davis served as the Confederacy’s president and Stephens was its vice president.

Each state gets to submit two statues for display in the Capitol.

When the donated statue arrives, it is placed in a location selected by the Joint Committee on the Library, a group of 10 lawmakers from both chambers that oversees works of fine art in the building.

Republicans note that some states are already working to replace some of about a dozen statues that would be potentially removed under the bill.

North Carolina, for example, is replacing a statue of Charles Aycock, a former governor and white supremacist, with that of the Rev. Billy Graham. But the process is painfully slow.

Republican Leader Kevin McCarthy, R-Calif., said he would vote for the bill, but made it a point to emphasize that ‘all the statues being removed by this bill are statues of Democrats.’

That prompted Rep. Karen Bass, D-Calif., to question whether Republicans were aware of the ‘whole history of the civil rights movement.’

She said that when black people fought to enter the Democratic Party, many Americans left to join the Republican Party.

Some Democratic lawmakers offered to work with Republicans on speeding up the approval process, but they want to forge ahead in the meantime.

Rep. Zoe Lofgren, the Democratic chair of the House Administration Committee, said the Confederate statues honor ‘traitors to their country.’

She denied that removing them would be erasing the nation’s history.

‘On the contrary, we must never forget our nation’s shameful periods of slavery, segregation and racism,’ Lofgren said.

‘Now, that history belongs in a museum. You know, we need to remember our history,’ she said. ‘It doesn’t belong on a pedestal.’

One statue already gone from the Capitol is that of Confederate Gen. Robert E. Lee, which was removed from the National Statuary Hall Collection last year at the request of Virginia Gov. Ralph Northam.

When House Speaker Nancy Pelosi became House speaker the first time, she had Lee’s statue banished to the crypt.

A state commission decided that Lee was not a fitting symbol for the state.

Just two weeks ago Congress approved a bill establishing Juneteenth as a new federal holiday commemorating the end of slavery in the United States, an unexpected breakthrough for supporters of the legislation.

Democrats see a similar chance to address longstanding frustrations about the statues in the Capitol and are putting Republican lawmakers on the spot by calling a vote.

Last year, Senate Minority Leader Mitch McConnell said he supported continuing the practice of states replacing the statues on their own.

‘They can trade them out at any time … a number of states are trading them out now,’ McConnell told reporters.

He also referred to the House legislation as ‘nonsense’ that would ‘airbrush the Capitol.’

However, Republicans joined Democrats in the final weeks of Trump’s tenure to override his veto of a defense policy bill that allows for the renaming of military bases that honor Confederate leaders.

Trump repeatedly emphasized his opposition to changing the names of the bases as he leaned into culture war issues during his 2020 re-election campaign.

While McCarthy shamed the Democrats for their historical links to racism, at Trump’s Ohio rally Saturday a number of his supporters carried Confederate flags.

Ohio was a Union state.