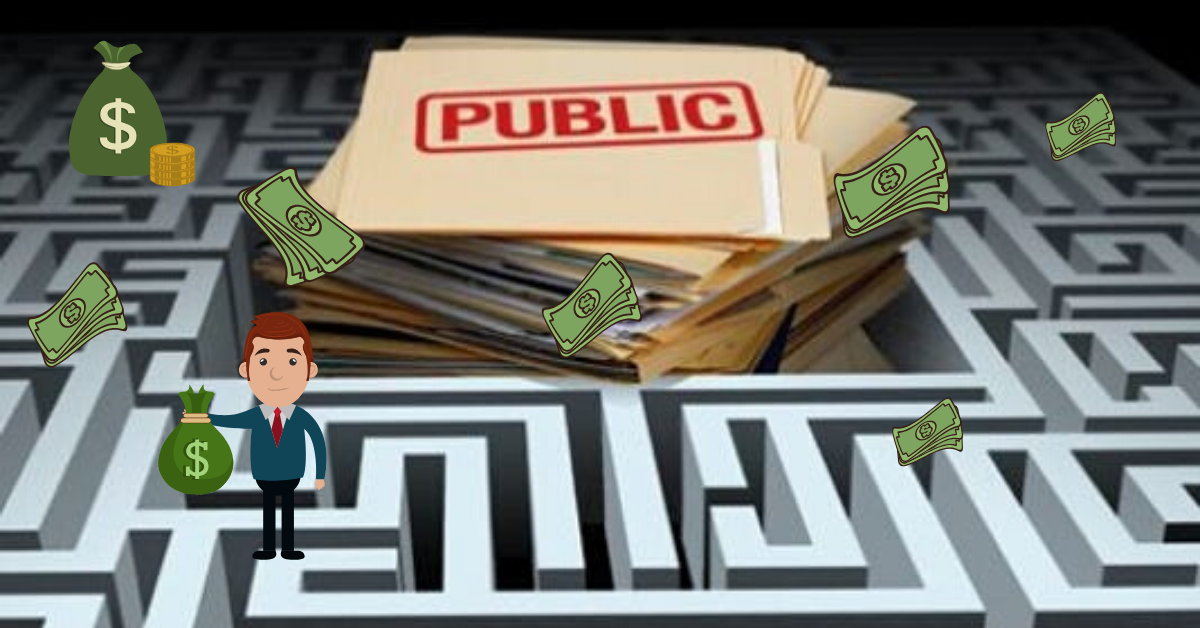 Updated 9:27am 1/16 to include Commissioner Tobia Response

The major changes he presented which were adopted in a 3-2 vote were:

What does this mean? The best way to explain that is to give an example.

For this example we will say the estimate was 2 hours. The resident would receive an invoice of $24.39 for 1.5 hours (first 30 minutes is free) at a maximum rate of ($16.26/hr) should Lober himself or his professional staff have to review the request. The requester would have to come out of pocket for $12.20 (50%) to proceed with the request.

Under the current system which has now passed, the same request would be broken down in this fashion. To calculate the hourly rate should the request have to be reviewed by Lober for exemptions/redactions, it would be his annual salary of $58,145.36 divided by 52 weeks. ($1,118.18 per week) This is where it gets interesting.

Lober says because “many individuals consider service on the Board of County Commissioners not to be a full-time job” instead of dividing that weekly salary by 40 hours (a normal full time work week) to instead divide it by 20 hours. This essentially doubles the hourly rate for processing these requests. 40 hours would have equated to $27.95/hr, however Lober wants the residents to pay $55.90/hr instead. But that’s not true either, because what he wants to add to that rate which we don’t know the value of his benefits.

Benefits in the State of Florida are paid almost exclusively to full time employees, not part time. So, he wants to claim a rate twice as high as a “part time employee” but also include his benefits as a full time employee when calculating the time he charges citizens to review their public records requests.

Also, instead of giving 30 minutes for processing requests without charging, he has cut that in half to 15 minutes. That means the same exact request that would have costs the citizen $12.20 to start, will now cost $97.84 ($55.90 x 1.75 hours) which must be paid in full up front. That’s an increase of over 800% (not counting the value of benefits) for the same request. To approximate the cost of benefits it would be approximately $9-10/hr for every $10,000 of benefits.

It is also reasonable to believe that any public records request would realistically take at least 15 minutes to read, process, review and deliver.

During the discussion of the item, Commissioner Lober stated that the County was hemorrhaging money to process the increase of requests. This is a claim that was challenged by Commissioner Tobia who voted against the item.

Tobia asked Lober what was the actual cost to substantiate his claim, but he was unable to provide an actual number. For that reason Tobia stated he felt that the County was sacrificing transparency in government for an unknown savings if any at all.

In response to Lober pointing out the increase in public records request over the last 3 years, Tobia stated it was a positive thing to have the public want to be more informed about their government and it should be encouraged, not made more difficult or expensive.

Tobia also asked Lober if the increase in the number of requests also indicated an increase in the time to process them or could it in fact be less time due to advances in technology. Lober also could not answer that question with any certainty.

By law, the County can request these fees, but the argument can be made that this is simply the costs of government business. It can be further argued that unless the employee who is processing the request is being paid overtime to do so, then they are working within the limits of their normal work hours which is a set cost to the County whether they are processing public records requests or not.

I believe that a government that is accessible and open provides the greatest opportunity for citizen participation, which is critical to our system of governance.

We have requested a report of overtime hours paid to employees who process public records requests from the Human Resources department. Depending on the outcome of that request, which we have reason to believe is very low to zero, we are unsure of what Commissioner Lober means by the County hemorrhaging money. By his own admission he did not bother to calculate it because he said it would be a waste of tax dollars to do so, in addition to not being able to quantify how much time was being spent on requests.

Commissioners Lober and Tobia were the only ones to discuss the item besides the County Attorney. Commissioner Smith made the motion to approve which passed 3-2 with Commissioners Isnardi and Tobia against the measure.

I think it is absurd.  People already pay taxes for their government.

The real cost is when someone has excessive requests, often dynamite fishing.

For us Court Records are $1 a page, by statute.  We do our best to make the copies available online for free.

Non-Court records are $.15 per page but we don’t even charge until we get past I believe 20 pages.

The first two hours of time is free for regular records, court records time is the same.

We’re not going to spend more money preparing and collecting a C.S. invoice than the revenue collected.

The salary should be based on the lowest possible person capable of doing the job.  It is hogwash to assign high priced people to a low level job just to jack the cost, as well as a waste of your Supervisor time (I would hope).  I’ve been stuck like that a few times on this bogus time and cost issue, the Board is copying over the policy from the Brevard County Sheriff’s Office.

Not one nickel should be paid for County Commission time.

Going further now, I will argue the County Commission job is a FULL-TIME job, whether they work it or not.  PERIOD.

When I won the Commission job I quit my job out at Grumman’s Joint STARS and did the County Commission job full-time for all four years.  If someone does not wish to work full-time then don’t run.  And do not whine about how valuable you are compared to the salary of $58,000 a year.

The County ONLY has insurance benefits for full-time employees.  The County Commissioners are in the insurance pool.  They are full-time whether or not they choose to work it.

Sorry to go off but most of this is just absurd and why the public is worn out on politicians.

When and if we receive the information requested from the County, we will update the article.

Public records requests with the County can be done online by clicking here.