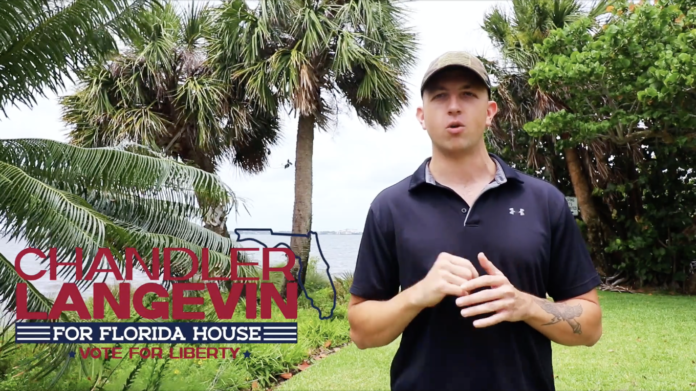 Navy Reservist Chandler Langevin (Republican) is running for Florida State House District 52 against State Representative Thad Altman (Republican) for the 2022 primary election. Currently, no Democrat has filed for the race.

Yesterday on his facebook page, he launched a campaign video attacking Altman on many fronts without naming him.

“Republicans in House District 52 will have two choices on the ballot to represent them in Tallahassee. Your choices will be between a ‘Ron DeSantis, Florida First Republican’ willing to stand up to the radical left…or a Niki (sic) Fried “RINO” who votes like a democrat and only represents the “woke” corporate elite.“

In his 2 minute video, Chandler says he’s “tired of being lied to by spineless swamp creatures who run as Republicans, and then go up to Tallahassee and vote like Democrats.”

As a strong advocate for the 2nd Amendment, and the President of Protect the 2nd, Chandler says he’s going to Tallahassee to bring the 2nd Amendment back, not just protect what’s left of it.

He states he plans on sponsoring a bill to make Florida a constitutional carry state on day one.

He also says he will vote no on every new tax, and budget increase proposed in the State of Florida.

Watch the video below.