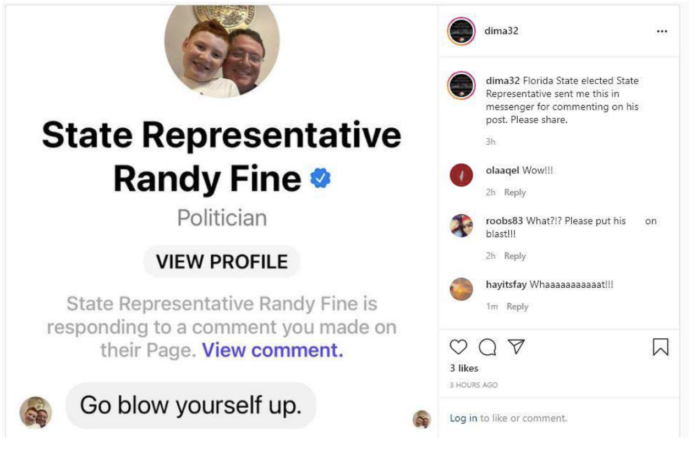 (TAMPA, FLA., 8/30/2021) – The Florida chapter of the Council on American-Islamic Relations (CAIR-Florida), the state’s largest Muslim civil rights and advocacy organization, today announced the filing of a sworn complaint alleging violation of the Florida House Rules relating to the egregious conduct of Representative Randy Fine.

The complaint exposes reiterated instances of egregious conduct on Facebook and Twitter platforms by Representative Fine, among them: calling Palestinians “animals” and following up with a comment calling for the annihilation of the Palestinian people saying “#BlowThemUp.”

Fine also attacked people of the Muslim faith calling them “monsters,” “terrorists,” and “rapists.” Fine sent a private Instagram message to a Florida citizen saying, “Go blow yourself up!” Fine was also faulted for weaponizing HB1 and HB741 by threatening punishment against people advocating for peace, justice, and human rights for the Palestinian people.

Attorney Murphy added, “There is simply no place in public discourse for religious discrimination, weaponized speech, and improper utilization of the legislative process to further a hateful personal agenda.”