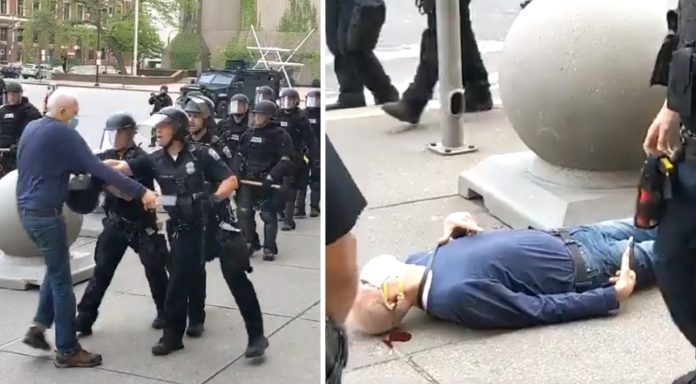 In a show of solidarity, the Brevard County chapter of the Fraternal Order of Police posted a call to their Facebook page on Saturday offering to hire the officers in Buffalo, New York, and Atlanta involved in or in support of a recent streak of high-profile cases of police brutality.

The F.O.P. is the world’s largest organization of sworn law enforcement officers, with more than 330,000 members in more than 2,200 union-like labor and fraternal lodges that offer “full-service member representation.”

The post, made at 1:21 a.m., said, “Hey Buffalo 57… and Atlanta 6… we are hiring in Florida. Lower taxes, no spineless leadership, or dumb mayors rambling on at press conferences… Plus… we got your back! #lawandorderFlorida #movetowhereyouare.”

The Brevard County F.O.P. seemed to directly address the 57 police officers who willfully resigned their duties in Buffalo, New York, as a show of solidarity after two of their peers were suspended and charged for the violent shoving of a 75-year-old unarmed, peaceful man on Thursday at a rally protesting police brutality. On the video, victim Martin Gugino is seen calmly approaching the officers, when they yelled at him to get out of the way, then pushed him to the ground. Gugino laid unconscious and bleeding profusely, as several other officers stepped over him and continued walking without administering aid.

The post also called out to the six ex-police officers in Atlanta who were charged for violently arresting, assaulting, and tasing two unarmed college students, Taniyah Pilgrim and Messiah Young, on May 29. Pilgrim and Young were not protesting that evening; the officers chased them, smashed their car windows, dragged them out, and assaulted them, breaking Young’s wrist, and tasing him for hours.

The post is currently pinned at the top of the Brevard County F.O.P. Facebook page and appearing posted as one of their official ads. Within just two hours the post had already received over 1,000 reactions, over 1,300 comments, and almost 900 shares – a vast majority of which condemned the sentiments expressed by the organization.

The post and the events referenced come under the context of the murder of 46-year-old George Floyd, a city of Minneapolis resident who died while in police custody when an officer knelt on his neck for almost nine minutes. His murder went on to spark international outrage and a series of protests against police brutality that have demonstrated in all 50 states and several countries worldwide, making it the largest civil rights movement in history.

Brevard County Sheriff Wayne Ivey said in an interview with the Space Coast Daily on Tuesday that, in 40 years on the job, he had not known reason or logic for the treatment and murder of George Floyd in Minneapolis.

“What happened that day was not only tragic, it was unnecessary,” Ivey said.

Though Ivey did attend a local candlelight vigil held for George Floyd on May 31, he notably did not attend the March for Justice, to which he was invited, on Saturday, nor the town hall that followed shortly after. Multiple chiefs of other Brevard County police departments who were also invited did attend either one or each of the events this Saturday aimed at ending police brutality.

WFTV reported that Brevard County is the only department practicing neck restraint policies in Central Florida.

Ivey said he would not be doing anything different moving forward in the training or guiding of members of the Brevard County Police.

“I think we have one of the most professional agencies in the country,” he said. “We recruit the absolutely best of the best.”

Almost 24 hours after the Facebook post, the Brevard County F.O.P. posted yet another call offering to hire new officers, this time, addressed directly to the Minneapolis Police.

Sheriff Ivey posted a response on his Facebook page denying any association with the post, however the person who admitted to the post is one of his Lieutenants. As of now the original post has been deleted as well as the ads.

This is a developing story and will be updated as it progresses.

Robert Burns contributed to this article.