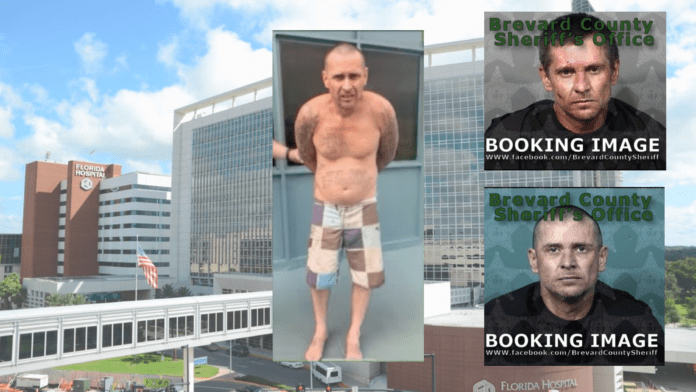 Brevard County Judge Crawford granted an emergency furlough for prisoner Steven Sylvester who was being held on a no-bond status, to go see “his son who was in the hospital dying.” According to the order, Sylvester was to be released on 10/21 at noon, and to return on 10/23 by 5pm. He had to be fitted with an ankle monitor and only permitted to be at his home or Advent Hospital in Orlando where his “son” was allegedly admitted and dying.

According to the arrest report, the GPS Monitor was cut at 5:15pm on 10/22. The monitor showed that Sylvester never went to his home, nor the hospital. Instead he went to the Fairfield Inn and Suites in Titusville, where security footage showed Sylvester had shaved his head in an attempt to change his appearance. The GPS monitor was found in the trash by his bail bondsman.

An arrest warrant was served on 10/28 for escape and tampering with an electronic monitoring device.

Sylvester was currently incarcerated for a slew of charges:

According to Brevard County Sheriff Wayne Ivey, Sylvester turned himself into his bondsman once he learned he was being tracked down by Deputy K-9’s. It’s not clear how Sylvester was able to convince the judge that he had a son who was dying in the hospital or what the process is for verifying such information.

In the motion requesting his leave, his attorney states to the court that Sylvester’s son is in the hospital with lymphoma. The only attached evidence to support the claim is pate 1 of 3 of a lab report of a tissue sample. There is nothing that verifies the relationship of the patient to Sylvester, nor is there any information on the current disposition of the patient, or if he is even admitted to the hospital.