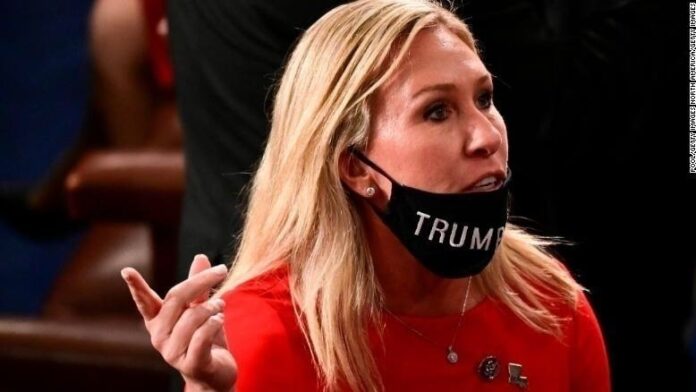 After 5 days of pressure, McCarthy publicly condemned the statements made by Greene. “Marjorie is wrong, and her intentional decision to compare the horrors of the Holocaust with wearing masks is appalling.”

Weissman, who has a following of over 324k Twitter followers has been a very vocal national voice in politics. He describes himself in his Twitter bio as “US Army Vet, American Jew, former Republican, former Trump supporter, Liberal Democrat, columnist for #Demcast.”

David made the national spotlight sharing his story of why he switched from and fierce Trump supporting Republican, to a Democrat.

Brevard County Democratic Executive Committee Chairwoman Pamela Castellana stated, “The only thing that compared to the Holocaust is the Holocaust.”

Florida State Representative Randy Fine, the only Jewish Republican in the State Legislature has been silent on Greene’s anti-Semetic remarks now and in the past when she blamed California wildfires on Jewish space lasers. Fine calls himself the champion for all Jews in Florida, but has made national headlines attacking his own Jewish constituents, and casually throwing around the term anti-Semite almost daily on his Facebook page; a behavior local Jewish leaders have denounced.

Weissman has stated it’s because of the behavior of Republican leaders like Fine that motivated him to ultimately change parties; and he’s not alone.

Weissman’s petition can be found here, and reads as follows.

As a veteran of the armed forces, I’ve been trained to assess threats and there is a serious threat to our country sitting in Congress that goes by the name of Marjorie Taylor Greene. She gained notoriety by spreading anti-Semitic conspiracies and has deployed her social media platform to incite an insurrection, support a plan to murder Speaker Pelosi, as well as to falsely accuse her colleagues of ties to terrorist groups. Marjorie Taylor Greene cannot even be trusted to be on any committees and is only in office to disrupt order and cause chaos.

Her recent comments comparing Covid-19 CDC guidelines to the Holocaust are deeply offensive and are just one of the many different ways she’s violated her oath as a member of Congress. I used to believe the Republican Party stood for decency, family values and good faith principles, but any continued support of Marjorie Taylor Greene, renders that demonstrably untrue. She is an active security threat to her colleagues, is unfit to serve the good people of this country, and she’s directly harmed our civil liberties and freedoms with her divisive and hateful rhetoric.

Marjorie Taylor Greene must be immediately expelled from Congress.