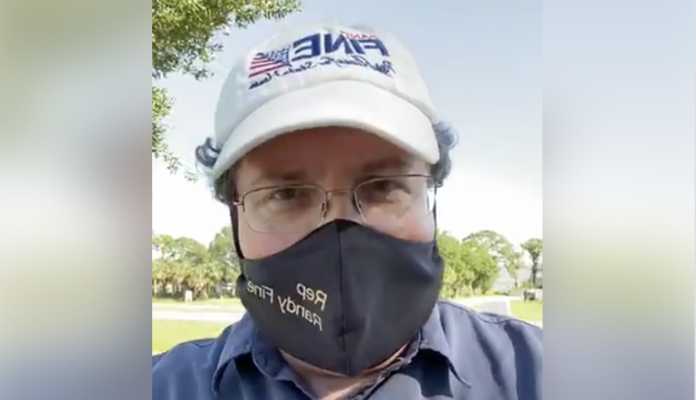 Less than 24 hours after coming down with a COVID-19 fever, Rep. Randy Fine, District 53, took a moment on Friday to post a dramatic tweet that casted an ominous light on the funeral services honoring civil rights leader and politician John Lewis.

In the heavily worded post, Fine said the event would go down “as a dark day in American history,” when our government “fully repudiated” the First Amendment, as indication of a “totalitarian takeover.”

The post included an image of the late Congressman’s funeral from inside Atlanta’s Ebenezer Baptist Church, showing the casket, some attendees, and Former President Barack Obama giving the eulogy at the podium.

“I have a big concern when the government decides who gets to have funerals and who doesn’t,” Fine said. “People are being told they can’t have funerals, or that they’re limited to ten guests, or that they have to do it over Zoom. But apparently, if you’re a politician you can have a funeral, but if you’re a regular person you can’t.”

Fine said he was referencing how the new coronavirus is changing the funeral experience. With calls for social distancing, the pandemic has been forcing families to mourn in unusual, often impersonal and dissatisfactory ways.

The issue is a real and rising social concern and has been reported about by various news outlets. However, dissecting the representative’s message, the conflation of federal government power over the demands being made by local state governments and even individual organizations in the private sector raises questions.

For context, the protections granted to Americans by the Constitution are protections from their government, not private institutions.

“Congress shall make no law,” our Founding Fathers wrote.

While the American government cannot deprive the people from assembly, a private organization, such as a church or a corporation, can very well run their place of worship and business however they best see fit.

This means that when the Ebenezer Baptist Church allowed the attendees to gather for Lewis’ funeral, it had nothing to do with the government. On that note, had the church declined to hold the gathering, it would not have been an example of government oppression.

It is the same when a restaurant, a doctor’s office, or a Walmart ask their customers to wear masks while inside – that is not government oppression, nor can it be fought with the Constitution if people disagree. It works the same way as when cake makers refuse to bake gay wedding cakes, and no one can use the Constitution to tell them otherwise.

Therefore, for the representative to suggest that a private church allowing a gathering for a funeral is an example of the government cherry-picking who can and cannot form assembly is just inaccurate.

“Our government fully repudiated the First Amendment and instead embraced the principle that it decides what “appropriate” assemblies are,” Fine tweeted.

“Our government” did not do anything here. A church, a pastor, friends, and family did.

With this, one could only assume that the representative is either not aware of the differences between the federal government and the private sector, or is willingly trying to push a false narrative.

Fine posted his thoughts to his Facebook as well, where he insisted on the same notion.

“We have fully entered a realm where government at the highest levels is deciding when our freedoms can be excercised [sic],” Fine posted.

The claims of totalitarian government takeover go under scrutiny also when we consider that the room at Lewis’ funeral was largely attended by people who no longer hold office or power of any kind and from both sides of the bipartisan political spectrum.

On Facebook, Fine’s post was met mostly with grace, with just a couple of criticisms. While his Twitter audience mainly ridiculed the post, and accused the representative of tweeting under a coronavirus fever stupor.

Fine went as far as suggesting that while protests are government sanctioned, his request to pay for a Fourth of July celebration was denied.

“Riots and ‘peaceful protests’? Ok. Public gatherings to celebrate America? Not ok,” Fine wrote on Facebook, as if protesters in cities across the United States were not having violence and chemical agents deployed on them, even by federal police in the case of Portland.

It has been confirmed that the Atlanta church can seat about 2,000 people, but only about 200 were in attendance at Lewis’ funeral event. Most of them wearing masks, though, to be fair, not everyone was keeping a safe 6-foot distance from one another.

However careless – or even hypocritical – as that may be construed, it pales in comparison to events like the Tulsa Republican Trump rally of 6,000 mostly unmasked guests, where some believe Herman Cain may have sadly contracted the virus that killed him.

When confronted by reasonable comments, Fine double down and brought up the George Floyd funeral as another example of some convenient double standard he was trying to argue.

A Facebook user also pointed out that the George Floyd and Lewis funerals happened in Texas and Georgia, respectively. Both of which are states where Republican governors have not outlawed public gatherings.

While some users asked in the comments if he was serious in his intentions or perhaps a bot account, for the most part, Fine’s comments were dubbed by many as “divisive” on both social media platforms. Indeed, his position of fear and resistance to the funeral gathering of what many believe to be American Hero clashes in stark contrast against the words of others that were spoken in Lewis’ honor.

“We are losing America” Fine said.

Yet thoughts of a more perfect Union and a better America were shared at what Fine called a “terrifying” display.

“When we do form a more perfect union — whether it’s years from now, or decades, or even if it takes another two centuries — John Lewis will be a founding father of that fuller, fairer, better America,” Obama said while giving the eulogy.