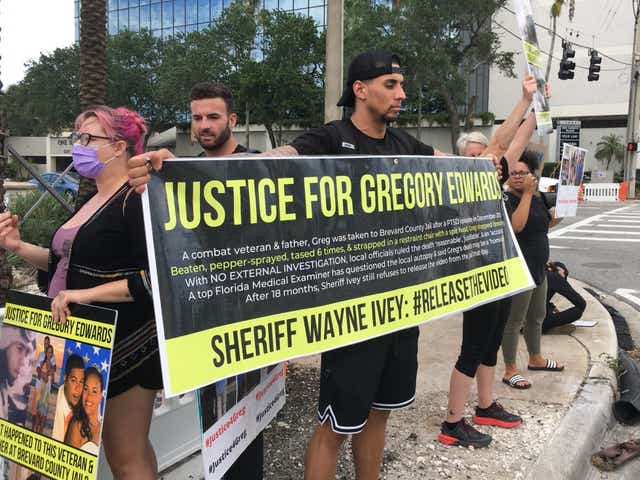 Citizens, activists, media from around the state, and even Sheriff Ivey himself were present in judge David Dugan’s courtroom in Viera this afternoon. A status conference in the Florida Today vs. BCSO lawsuit came to order shortly after noon today, with judge Dugan remarking about the importance of this case his excitement regarding the interest of the public.

Arguments in the hearing began this afternoon with attorneys for Florida Today pointing out that they believe they have provided to the attorneys for BCSO a more than reasonably redacted copy of the video necessary to address the security concerns at issue. Drafts of a written agreement were also exchanged prior to today’s hearing, but the attorneys for Florida Today took issue with a couple items on the proposed agreement. One such issue was a time constraint regarding when the video could be released.

Attorneys for BCSO stated they had also produced a redacted copy of the video in question, however their video is only one hour long whereas the video produced by the company hired by Florida Today’s legal team is of the full two hours Mr. Edwards spent inside the jail. Judge Dugan also remarked that the video from the Sheriff’s Office had something added to it, however because we at The Space Coast Rocket have not seen either video it is unclear what he meant by this. He also made it a point to state that the entire video, less the redactions for security reasons, should be released to the public.

Laura Moody, the lead attorney for BCSO made it clear that the Sheriff’s Office objects to Florida Today being allowed to view the redacted copies of the video created by either legal team, which raises some serious concerns. Florida Today is the plaintiff and the final decision maker, and should not be expected to agree to something sight unseen. Judge Dugan seemed to concur, but agreed that the attorneys should meet this afternoon to further the process of coming to an agreement before that would take place.

A little over an hour into the hearing, the court recessed and attorneys for both parties moved to the jury deliberation room where they spent two and a half hours hashing out the details of an agreement for releasing a redacted version of the video to the public. When the hearing resumed, there was a renewed sense of hopefulness expressed by attorneys for both parties. A deadline of November 6th, 2020 has been set for the final agreement to be submitted to the court, otherwise the matter will go to trial on November 16th, 2020.

Jessica Travis, one of the attorneys representing Florida Today, noted also that none of the proposed redactions obscure Mr. Edwards or anything relating to him. And in the final draft of the tentative agreement reached this afternoon, provided that the necessary confidentiality agreements are in place, Florida Today will be permitted to view the final product of the redaction process before deciding whether to settle or move to trial. The discrepancy regarding the length of each party’s video productions seems also to have been worked out.

As always, stick with The Space Coast Rocket for the latest detailed information regarding this case as it moves through the judicial system.