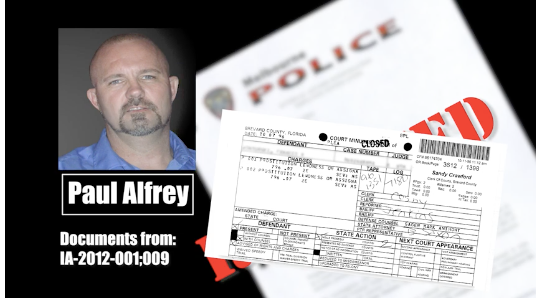 Today, a video surfaced by an organization named Preserving Florida’s Future showing official documents, and public records that during an internal affairs drug investigation into then Officer Alfrey, he was found to be with a prostitute while on duty, and while still married to his former wife.

Arrest records and investigative reports from an MPD Internal Affairs investigation into Alfrey committing time card fraud, provided by the organization on their website, show sworn testimony by her and Alfrey admitting to frequenting her house during duty hours. During this particular incident in question, Alfrey states he went there to clean his contacts, and then retrieved his eyeglasses which he left on her night stand.

She is now his current wife.


Court records provided by the organization also showed Alfrey was charged with Criminal Domestic Violence from another previous relationship.

Previous reporting and evidence all provided by this organization showed another internal affairs investigation into Alfrey’s mishandling of narcotics, to include MDMA and Meth. The investigation’s findings were sustained, and Alfrey was to be removed from his position as a K-9 Officer. However, Alfrey voluntarily resigned from the Melbourne Police Department before action could be taken against him.

Just this April, Alfrey’s niece and daughter of his brother, and business partner Brian Alfrey in Alfrey Roofing, was arrested for drug trafficking of some of the same drugs Officer Alfrey was investigated for to include meth.

Vice Mayor Alfrey interprets his resignation as “retiring” according to his official bio on the City of Melbourne’s website, his campaign materials, and a text message his campaign just sent out today to voters stating the following:

When questioned about the arrest of his niece for dealing drugs, Vice Mayor Alfrey threatened Robert Burns (the owner of this publication) and stated Brian Alfrey would be coming to see Burns very soon.

Shortly after that, Brian Alfrey started sending threats to Burns’ personal cell phone to make good on Vice Mayor Alfrey’s threats. He has since deleted his comments from his Facebook page.

The organization Preserving Florida’s Future has gathered a career’s worth of evidence, documents, and behavior painting a picture of Vice Mayor Alfrey not often seen by the public.

His troubled career as a police officer inlcuding settlements for police brutality, time card fraud investigations, drug mishandling, mishandling of equipment, several letters of reprimand, and other reckless behavior, appears to now be spilling over into his style of governing, and even campaigning.

The same day that Burns received these threats from the Alfrey brothers, Paul Alfrey’s opponent for Mayor, C.J. Johnson’s (Republican) house was broken into by who he believes was an investigator who claims to work on Paul’s behalf.

Not mentioned previously, but now beginning to surface are Paul Alfrey’s recent financial issues. Alfrey constantly references his successful track record as a businessman, but public records show a recent foreclosure in 2014 and being sued by Community Credit Union in 2017, while in office for failing to pay his debts.

It is beginning to appear that Paul Alfrey’s words of being the law and order candidate, and a fiscally responsible conservative, don’t tend to match up with his actions.