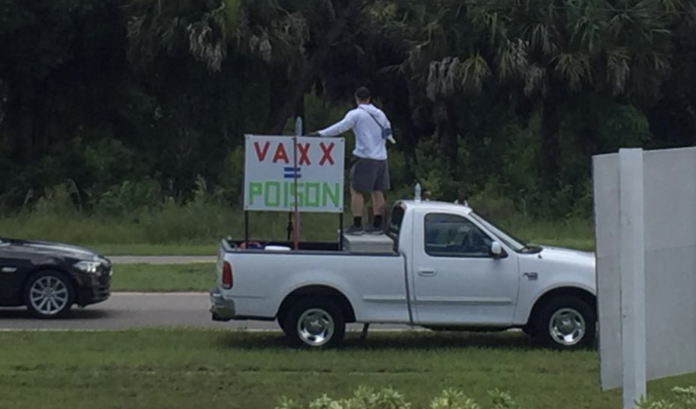 State Representative Randy Fine, for the last several weeks, has been strongly trying to convince people to get the Covid-19 vaccine on his official Facebook page.

Today, a well known Republican adversary of Fine, protested outside his office for Fine pushing the vaccine on people. He has protested against Fine in the past for Fine’s anti-second amendment positions/votes, and advocating for raising the age to purchase a firearm.

Fine took to Facebook today to call the citizen exercising his first amendment right, and others who are against the vaccine, or don’t feel it is safe, idiots.

According the Brevard County Manager, only 28% of Brevard County Fire Fighters have chosen to get the vaccine, despite vaccine monetary incentives pushed by Commissioner Bryan Lober.

Comments from many voters on his page have been deleted by Fine, but some suggested simply walking outside to speak to the citizen exercising his rights instead of trying to shame him on Facebook. Representative Fine consistently suppresses and attacks freedom of speech when it is opposite of his positions.

The calling of names, or trying to publicly shame citizens has also become commonplace behavior for this Representative.

Data reported by the CDC has stated that those who have received the vaccine, are doing far better than those who have not that have actually contracted the virus. Fine has emphatically stated that we should be following the guidance of the CDC. However, consistent with his confusing messaging, within hours of saying to follow the CDC, he says not to follow it on other issues such as face coverings.

In a Facebook Live video last week, he also stated that the “government has done all it can do” and now it’s up to the people. The next day he stated the President isn’t doing enough. People are understandably confused by his conflicting messages, and he has received harsh criticism from both sides of the aisle on the issues. But his constant shaming and attacking of citizens exercising their rights is probably the biggest thing that has brought the citizens together in agreement of speaking against this unconstitutional and un-American behavior.