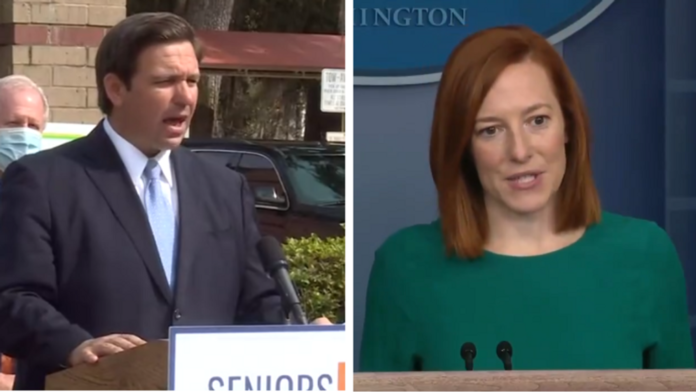 The White House challenged Florida Gov. Ron DeSantis’ assertion that a lack of vaccine supplies from the federal government was holding up the state’s efforts.

DeSantis has repeatedly claimed Florida had the capacity to dramatically increase vaccinations if the federal government would provide more doses. And last week he dismissed Biden’s plan to use the Federal Emergency Management Administration to set up vaccination centers.

“I saw some of this stuff Biden’s putting out, that he’s going to create these FEMA camps, I can tell you, that’s not necessary in Florida,” he said. “All we need is more vaccine. Just get us more vaccine.”

Asked about the governor’s comments at a Monday press briefing, White House press secretary Jen Psaki at first said the president didn’t have a reaction, but then she pointed to Florida’s failure to administer half the vaccine doses the state had already received.

“Well, the president is a pretty even-keeled guy,” she began. “So I would say he doesn’t have much of a reaction, other than he wants to ensure that the vaccine is distributed to people across the country, including, of course, the millions of people living in Florida.”

“I will note, because we’re data first here, facts first here, they’ve only distributed about 50% of the vaccines that they have been given in Florida,” she said. “So clearly they have a good deal of the vaccine. That supply will need to continue to increase as they are able to effectively reach people across the state.”

“But part of the challenge, as we were just talking about is not just having the supply — that’s pivotal — but also having vaccinators and having vaccine distribution places, and doing it in a way that’s reaching people where they are and meeting local communities. And the president’s going to be focused on that in a bipartisan manner regardless of what any elected official may have to say.”

Florida has received 2.9 million doses from the federal government, as of Sunday, according to the U.S. Centers for Disease Control. The state has administered 1.5 million, according to Sunday’s vaccination report from the Florida Department of Health.

DeSantis attributed the state’s unused vaccines to the presence of second doses that had not been administered. Each of the two vaccines approved for use in the United States requires a second dose, one after three weeks, the other after four weeks.

The numbers will change dramatically, he said, as more second doses come due.

DeSantis has said that the state’s vaccination statistics typically have a lag of three days or more, so he says the actual number vaccinated is higher than what’s reflected in the state’s statistics.

The Biden plan calls for setting up vaccination clinics across the United States with the help of FEMA, an agency experienced in quickly setting up sites for delivering emergency services.

DeSantis’ characterization of the vaccination centers as “FEMA camps” uses a phrase common in a far-right conspiracy theory that an oppressive federal government will use FEMA to establish detention camps for political opponents.

“We’re getting about 266,000 first doses a week. We clearly have the capacity to do much, much more than that. So what I’ve said from the federal government’s perspective, I think the only thing they need to be focusing on is increasing the supply of these doses for our seniors,” DeSantis said. “If you get us more supply, we’re going to be able to get that into people’s arms.”

Despite DeSantis’ focus on supply, the state has experienced severe difficulties in distributing the vaccine. The effort has been marred by web site and phone system failures, long lines and confusion about where to go for the shots. Many of those who succeeded in getting the initial shots say it’s not clear how they’re supposed to obtain the required booster in three or four weeks.

DeSantis also said Monday that residents and staff of all long-term care facilities in Florida will be offered the COVID vaccine by Sunday.

Long-term care facilities had complained about not receiving vaccines, despite having been promised from the start they would be at the head of the line. After these complaints, the state hired a new company to speed the vaccination process.

“Today I’m able to announce that by the end of this month, a COVID-19 vaccine will have been offered to every resident and staff member at all of Florida’s nearly 4,000 long-term care facilities,” DeSantis said in a news conference at the River Garden Hebrew House for the Aged in Jacksonville.

The governor said about 22% of the state’s 4.5 million seniors had received the first shot of either the Moderna or the Pfizer vaccine.